A Music Production Guide (part 1) – Having clear ideas before starting, the Pre-Production

Are you ready? Fasten your seat belt, this article is the start of “A Music Production Guide”, where I’ll chase on the trail of all the production steps, both creative and technical; needed to make a music album. To narrate it, I’ll use as an example a hypothetical band (named “The Marks”), composed by 5 elements, who enter a studio to realize a first music album.

Let’s imagine that the band has a lot of songs in its repertoire: which ones would they put in the album? How would they compose their line-up? Should the songs be arranged to give a sense of unicity to the album OR is better to disarticulate the composition, just creating a playlist of songs?

The artistic choices, from this point, are a lot! Amidst the lot are the nuances which can determine the failure or the success the end product. It is important to highlight that, in any case, the recording of an album is an experience that the musician does for him/herself, independently from the audience who will listen to the album. A different approach would devalue the meaning of the opera, alienating the musician from the artistic intent, from his trip toward the sublime.

Why make a music album?

Leaving alone all the material and financial incentive, the profound motivations have to be researched in something more noble and philosophical. There has to be the need to express oneself, as musicians and as a sum, in a band, where the final result is worth more than the single factors which add it up.

It enters in play the self-identification with one’s own music and the need to share it with the world. In minor measure, there is also the need of self-affirmation, researched by playing a role and standing in a definite place in a more complex machine, as a music band could be. The recording process often occurs to mark the walking path, to give a meaning to the work done so far in a rehearsal room or on a stage during a live gig. All of this, without forgetting that pinch of personal mere ambition that every musician has: leaving a mark. It doesn’t matter if the audience is humongous or small, as long as a true appreciation is given for what the musician is sharing. It is not always a matter of producing an album which will change the history of music; sometimes, it is simply to be recognized for the music composed, played and produced.

The studio recording experience is one of the most involving, intense and magical experiences which a band should try at least once. It is a moment where all the knots come to the comb, in which all the social dynamics within the bands are intensified. Despite the hard work involved, it is in most cases a fun experience!

Anyway, the starting point for any kind of product made in a studio (a single, an EP, an album) is the pre-production. A good pre-production allows one to have clear ideas on what is needed to be done, reducing the number of procedural mistakes. This phase is comprehensive of several steps, from ideological speculations to more technical consideration. It is important to choose and select with awareness, the songs that compose the final product, always clearly having in mind the final goal.

What do you put inside the album?

Surely all those songs or music pieces are characterizing the band, in its lyrical and musical content. At this point it is important to take a decision; is there a will to liaise all the songs (and going closer to the idea of a concept album) or use the album just as a song container, with the only goal to diffuse, disseminate and spread the music inside?

Even though the band operates the second choice the songs should still have a bit harmony and intent, making the product enjoyable in its totality and also in every single part that frame the album. It is also useful to keep in mind that and album (or an EP) is a photography of a specific artistic moment of a band or an artist, of its maturity, of its sound. For this is opportune to evaluate our own work in these terms, selecting songs that better represent that growth, but at the same time finding the right compromise with the commercial aspect of the idea. With commercial aspect I’m not referring to sale, income and profits, but about that quid which is needed to reach to biggest audience.

In the modern society a concept album is a high-risk product. Lately, we are used to ready fast goods, packaged to be consumed instantaneously and discarded. This way of looking at things has contaminated the music scene in a heavy manner. To identify an artist, we no longer refer to an entire album, we look at the single, a specific song. That active and exclusive listening experience, to contextualize an album in a more articulated piece, has almost totally disappeared. We simply tend to take the emotional vibe of the single fragment, disarticulating a song from its album and adding it in our own playlist, in any of our devices. This kind of listening, purely instinctual and passive, disaccustoms the audience to the appreciation and comprehension of music. It transforms the intimate of act of listening to an ‘almost hearing’, where the trend is to satisfy a greediness of cheap emotions, downplaying the music to a mere consuming good from an exploratory journey.

As a paradox, we could compare this process to the difference between nourishing and stodging, where a healthy need, like eating is brought to the excess, downplaying the value of the food, which at that point becomes a goal and not a means to health. Also, the pace and the rhythm of the world we are living in, is accustoming us to live an emotion of a radio play length, precluding the fruition of all the thematic and nuances which need more time to be valued, understood and appreciated.

In part those are the reasons which most probably would make a masterpiece like “The Dark Side of the Moon” (Pink Floyd, 1973), to miserably fail.

”The Marks”, discouraged by this way of thinking, they discard the option of a concept album, still researching a minimal coherence throughout all their songs. The decision is to realize a slim product, not too expensive for them, but which still testify the artistic maturity reached by the band. To this scope, they choose 9 songs, for a total duration of 45 minutes. During this step, ideas of richer arrangement (compared to what is played in the rehearsal room) are developed. There is the need of better structuring the contents, reviewing the arrangement and the structures, keys and tempos. It is important to fix contents and ideas which are going to compose the songs. Things are now becoming hot!
To keep going with the right foot, and also to have a complete view of what is going to be recorded, it is warmly advised to prepare guide tracks. Those tracks, other than helping the band in having a broad view of the product they are going to produce, they will be very helpful during the first studio sessions. They will guide the musician during the tracking process, giving him directions to the songs, becoming a compass.

There are several ways of making those guide tracks, it keeps changing from band to band, from artist to artist. I will take into consideration only two methods, to most used, analyzing their pros and cons.

A personal tip: during the writing of the guide tracks, it is advised to distinguish the denotative and connotative elements of the songs you are going to record. For this purpose, let me backlink one of my previous articles about the “Corpus Mechanicus and Corpus Misticum”, to use it a general guideline for this task.

With clearer ideas and guide tracks at hand, “The Marks”, after a heavy rehearsal session, would start to look for a studio which better fits their needs, and fully enter in the production phase.

See you in the next episode! 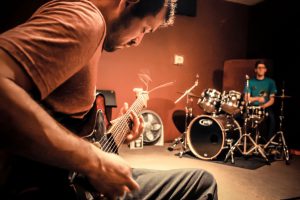 4 Responses to A Music Production Guide (part 1) – Having clear ideas before starting, the Pre-Production