How do you mix a song?

Let me start with a very happy belated Happy New Year! It has been a minute from the last post, but things were a bit hectic on my side. Anyway, some time back I was in the habit of posting what I called sound facts on my Facebook page. After receiving a lot of direct messages asking for further explanations, I decided to start expounding them one by one in the blog. 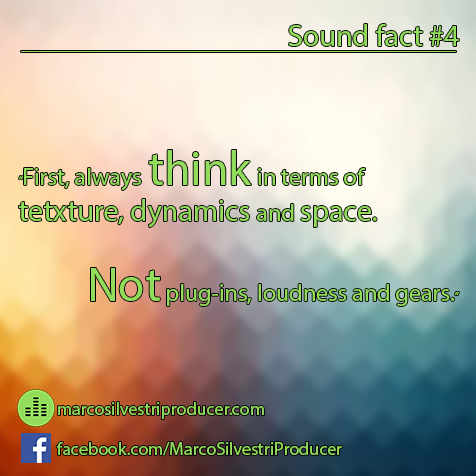 “First, always think in terms of texture, dynamics and space. Not plug-ins, loudness and gears.”

The fact itself is a bit cryptic, and it deserves the right amount of attention to be expounded further. When we approach mixing a song, sometimes it’s hard to have a clear focus on the idea and on the final result we want to achieve. Our DAWs are often clogged with plenty of plugins, which tempts us to immediately try this processor or that effect, consequently making us drift from the bigger picture because we are focused on a small detail.

We should always take a minute to think first, build the idea by taking into consideration what I think are the fundamental elements of a song, but more with the general outlook of an audiovisual product. Why is the idea so important? Through the idea we can identify, add, enhance the connotative and denotative elements of a song, we can understand and resonate with it and maximize the efficiency of our intervention. Also, let’s not forget that the original meaning of “Idea” is a primordial and substantial essence. We need to understand that essence because it is behind the originality and the uniqueness of every piece of art.

That being said, what are the fundamental pieces that compose the idea of a song?

As you can see and imagine, before getting into a single plugin, is important for us to have clear objectives. Personally, even after figuring the idea out, I start by using the plugins that are given in bundles with my DAW, in order to avoid any distraction and go straight to the point. Then later on, once I’ve nailed the idea, I can fine tune with the specific plugin which better satisfies my creativity and the needs of the song.

If you want to know more, you can subscribe to my class here.

18 Responses to How do you mix a song?